From the journal article Sept 2010:

Although we might once have been, we are now no longer ‘of’ the sea. We can sometimes for short periods of time be in the sea, but we are mostly on the sea, and the sea is on us. We are ‘of’ the air. As surfers, when we are in the water, we are actually on the water, and when we ride a ‘wave’, we are riding an energetic transmutation of the weight of air, specifically, the changing weight of air. 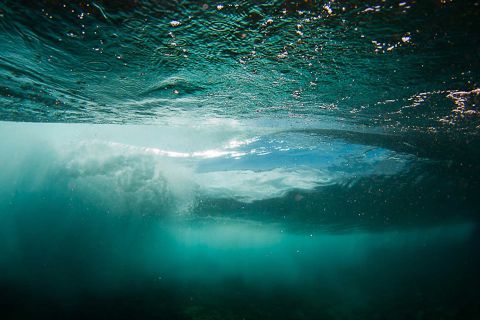 Consider the sea and oceans of the world as a jelly, and the surface of this jelly medium as a skin and lets think of this as our idealized world where we can make generalizations. 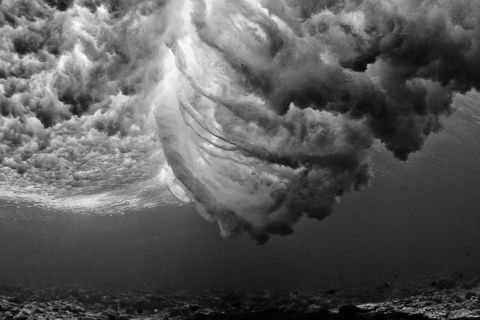 The jelly, as a whole, over time, is always at a state of ‘rest’ or equilibrium. It is in a sense magnanimous, and endlessly accommodating of all pressures and forces applied to it. The jelly yields to the greater force for as long as that force or pressure is applied, only to return to its original state once the force weakens or is released. The force or pressure acting on the jelly is never absorbed, and the associated energy or mass exerted is never transferred into the jelly medium. If ever there was something that just ‘is’, it is the jelly. 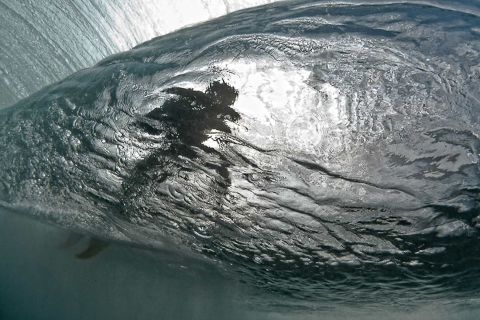 The jelly is a jelly because of the unique electrical nature of the atoms that make up the molecules of the jelly. Interestingly, electrical attraction between the jelly molecules pulls the molecules closer together into a hexagonal matrix, bonding them into a cohesive whole. In other words, the jelly sticks together. But at the same time these charged molecules are constantly moving in relation to each other, bonding, breaking, and reforming at time scales faster than roughly every billionth of a second!

The jelly, although vast, is not endless, and at some point reaches it’s outermost limits - bound below and to the sides by the container known as ‘earth’, and from above by the air and atmosphere. Where as within the jelly the molecules are attached to other molecules on all sides and pulled equally in all directions (meaning a net force of zero), it reaches a point at the surface of the jelly where the last molecules at the very boundary of the jelly only have other jelly molecules alongside them or inside of them and are no longer pulled equally in all directions - they are being pulled either sideways or into the interior of the jelly.

These surface molecules can put this ‘spare’ energy arising from the lack of bonding partners into adhering to those molecules inside of and alongside them, forming a stronger bond between themselves compared to those within the jelly, which creates a tension that basically seals off the jelly like a skin. 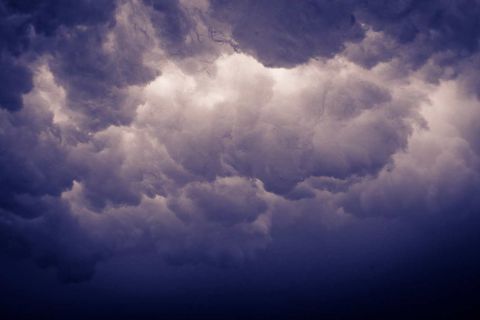 The appearance then of the jelly having a skin and behaving as if it had a skin or thin elastic membrane is because of the unique intermolecular behavior of the molecules on the surface of the jelly, and is know as surface tension. The forces involved mean it is in the skin’s nature to contract, and at all times to try and reduce the surface area of the jelly to the smallest possible size.

Also, because of the surface tension and resultant surface area minimization, the skin assumes the smoothest shape it can and in combination with the restoring force within the jelly medium matrix, is what is responsible for the jelly returning to a state of calmness as quickly as possible after any disturbance has impacted it.

In fact the jelly, skin and air above are part of a larger system that retains the air above through gravity and in turn the air above weighs down on the jelly and skin applying varying force to it depending on its density, which is a function of the temperature, pressure and humidity of that air. This force exerted against the jelly and its skin by the weight of the air above is known as atmospheric pressure. 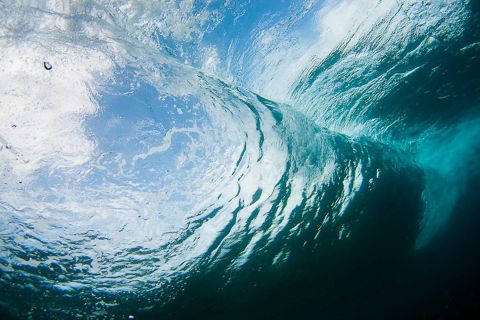 Researching atmospheric science one finds very quickly that most of the explanations of weather phenomena and meteorology are idealizations of atmospheric motion from atmospheric modeling and are ‘steady state’ theories, or static explanations of dynamically interconnected systems and are too one dimensional to anywhere nearly approximate what really happens (in the pressure systems) in the air above our jelly and skin and as weather itself demonstrates, steady state conditions are exceptional - i.e. they seldom occur - things are more dynamic, no, chaotic than we could ever model. Atmospheric science requires isolation (vacuums) and constants and nowhere nearly conveys the dynamic nature of weather as it occurs. 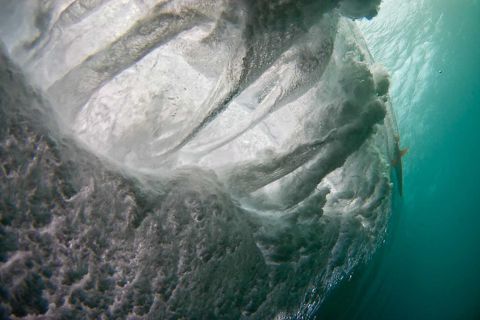 For example, surfing and surf forecasting has a broad wave science that at its core revolves around a theory or a mythology that states that waves and swell are created by the wind. The theory goes that wind blows over the sea creating ripples that grow increasing friction which allows the wind to gain more traction which allows the ripples to grow further and turn into small waves and the wind blows more and the small waves become larger waves and then finally turn into huge waves. The argument is that wind transfers its energy from the air into the water and the size of the waves generated are a function of wind velocity, wind duration and wind fetch. As the waves grow larger, the distance between waves becomes greater signifying more and more energy being transferred deeper into the ocean meaning they’re able to better sustain themselves as they travel across the ocean. Luckily for us the waves still reach us, whether we know how they’re created or not. 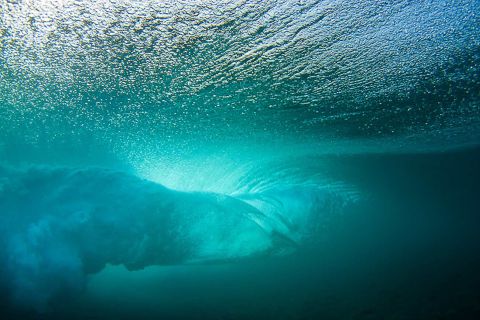 Here is another theory to add to the mix.

Changes in and between pressure systems in the atmosphere are way more dynamic and radical than we currently model or imagine. Temperatures, densities and pressures within masses of air form disturbances of varying size, duration and intensity that change rapidly and frequently within themselves and interact dramatically with other adjacent similarly dynamic disturbances causing chaotic states of weather that impact the surface tension of the skin of the jelly medium, stretching it, pulling it up and drumming it down repeatedly at different levels of intensity during the life cycle of a storm, as it grows, peaks and then subsides.

The differences in air pressure within or between these pressure systems is referred to as the pressure gradient and constitutes one of the main forces acting on the air to make it flow or move as wind. Similarly, differences in pressure between columns of air are responsible for the different weights of air above the jelly, pressing down and lifting the skin of the jelly medium, stretching it and increasing the surface tension and energy building in it.

As the pressure gradient strengthens or weakens so too do the forces acting on the skin and surface tension of the jelly, influencing how much work the skin does stretching and also how much energy is transferred into the skin. The energy built up by the skin stretching is released when the pressure being applied is released and occurs frequently and at varying intensities during the life cycle of the storm. 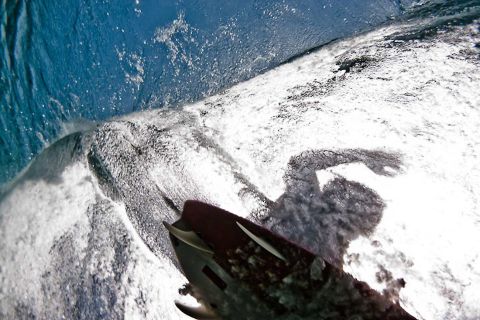 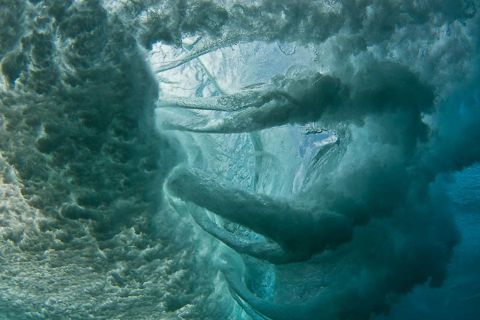 In a complex interaction between skin tension and elasticity, these energy pulses overwhelm the skin tension / jelly dynamic upon their initial release and for a lack of a better description ‘shorts the system’. When this happens the energy re-orders itself backwards into the centre of the disturbed area, phase shifts into wave form and then pulses outward in ‘manageable’ energy packets or wave envelopes, being the most efficient way for the energy created to travel through the skin to a place of lower concentration. The waves that make up the energy packets or wave envelopes consist of combination waves, within the transverse waves are oscillating compression waves. 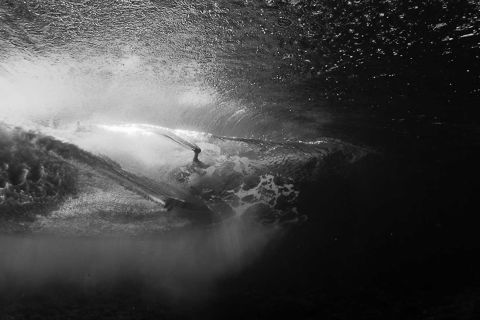 As the energy packet moving through the skin of the jelly medium approaches the beach, it senses (because it’s aware) the solid mass or denser immovable medium of the earth below, and changes it’s shape according to the varying environments it encounters. As this dynamic becomes critical the skin distorts and bends around the shape of the earth (reef or sandbank), forming the ‘wave’.

Once this condition reaches the state of no return the state change from ‘pure’ energy to water falling becomes imminent and then occurs when the jelly falls, crashes into itself and shatters, releasing the delirium in the vortex.

In a sense the skin behaves like a mirror or reflector, reflecting the forces and pressures applied to it in all it’s variables out at ‘sea’, onto the near shore, the manner in which this is done is by sending or transmitting a signal through the skin of the jelly medium.

The jelly is so passive that even when the wave breaks, all it does is fall.

Delirium can only be released when the jelly crashes into itself and shatters.

Delirium is almost as rare as Unobtainium, and is the stoniest version of a natural high.

It’s the release that kicks everything in.