A suspension is the act of suspending a human body from hooks that have been put through body piercings. These piercings are temporary and are performed just prior to the actual suspension.

Photographer Alejandro Plesch has been hangin’ out at the event: Unique Body Art that took place in Bali the past 26th, November- 2010 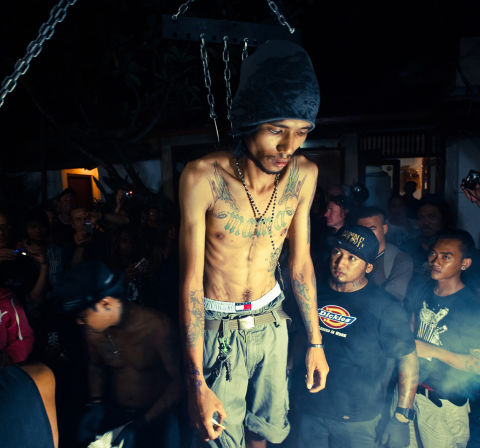 From Wikipedia, the free encyclopedia:

A suspension is the act of suspending a human body from hooks that have been put through body piercings. These piercings are temporary and are performed just prior to the actual suspension.

The process is very delicate and is typically done carefully by an experienced individual or professional of the field in order to avoid serious injury. Suspension may require and often has a small group who handle preparations and the process itself. The actual act of being suspended may take up a tiny portion of time compared to the time involved in preparation, though some people remain suspended for hours. If carried out properly, the suspendee’s body will be studied to decide the proper placement, number, and size of metal hooks which are pierced into the skin to lift the person off the ground.

Multiple hooks are usually located around the shoulders, upper arm, and back, as well as around the knees (this depends on the position in which the body is to be suspended). Finding the proper hook placement and number involves a great deal of skill in mathematics and an acute understanding of human anatomy and physiology, as well as the durability of the individual’s skin. If the number of hooks are too few, the suspended individual’s skin will be unable to withstand the body’s weight and will rip. When using body areas with fairly strong skin, approximately 2 piercings may be sufficient for some people. Also, the amount of weight each hook supports must be distributed evenly throughout the entire body — any imbalance risks injury.

Suspensions are sometimes used for meditation supposedly to gain a higher level of spiritual fulfillment or awareness. It can also be used as entertainment or as performance art. Acrobatic actions may be performed, most commonly during a ‘suicide’ suspension.

Historically, suspension rituals were performed by the Mandan tribe, located along the banks of the Missouri River. The Oh-Kee-Pa type of suspension was derived from this ritual. Modern day suspensions are closely related to the artwork of performance artists that use their own bodies as canvases. Roland Loomis was an artist who specialized in suspension and piercing performance pieces, also starting the Modern Primitivism movement. He helped to bring attention to the suspension ‘scene’ in the United States. Allen Falkner helped to bring suspensions to people who weren’t spiritual, as well as a plethora of different and unique suspensions types.